Cripface, Sia and the need for comparisons.

I’ve said it many times before, and I’ll say it again. Ableism is insidious.

As I’ve written about before, ableism can be found in many places and spaces, overtly and covertly. It is so insidious that it happens right in front of us, and we don’t even notice because we have been so used to seeing it. My recent article discussing the documentary Disclosure is a perfect example of this. For decades we have been taught to laugh at the transgender community, but we didn’t realise that’s what we were doing until it was pointed out to us. When I first started talking about ableism, there were misconceptions amongst some that it was a positive term, because those of us with disabilities are able. I then found a handy tip  I utilise which asks us to consider if something would be acceptable if we replace it with gender or race. If not, then it shouldn’t be acceptable for people with disabilities to put up with. A great starting point to introduce people to ableism a.k.a. disability discrimination.

There is a lot of discussion about comparing, with many saying we should not compare something that is occurring in one group of people to that of experiences of another group. For example, I’ve had it suggested to me that because I have a disability and experience ableism, I, therefore, know what the experience of racism is like. As a white woman, I can say that I do NOT know what the experience of racism is like and will never understand the experience. As an a11y, I am aware of the issues, but I do not know what it is like to experience racism and the centuries of experiences that go along with it. My privilege prevents me from that. However, as I demonstrated with the gender/race experiment, comparisons are necessary for us to understand things we are not familiar with.

With this all laid out, let’s now talk about Sia. If you haven’t seen, Sia has been in the headlines recently due to a new music video which tells the story of an autistic person. You may be reading this and thinking, what a great way of raising awareness. Well, just hold off on that thought for a moment. There is currently a Twitter war taking place between Sia and disability advocates because the person who is portraying the autistic character, is not themselves autistic. This is ableist. It’s not acceptable for a white person to be playing a person of colour, even voice acting. The #BlackLivesMatter movement has shown us that, and people have been listening. So now it’s time to understand that it is the same when it comes to people with disabilities. It is not acceptable to be portraying a person with a disability if the actor does not have a disability. The only people that should be in these roles are people with disabilities. When an actor without a disability does this, it’s known as ‘cripface’ and it can be hurtful. Not just because it is taking a job away from someone else, but the portrayals often create or perpetuate stereotypes that we are constantly fighting against. When I first came across this term, I erred about using it due to the discussions about comparisons, but the term drives home just how offensive the issue is. Going back to Sia, rather than apologising and checking her privilege, she has doubled down and played the victim at the hands of the disability advocates. Oh, to be a privileged white woman without a disability. Reminds me of the time Fifi Box parked in a disabled car park, laughed about it on radio and then cried victim because she was being called out for laughing about it by the disability community.

So while it’s important we understand we cannot experience things other marginalised groups do because of our own privilege, comparison is necessary. It is only through comparison, and discussing these comparisons that we help others understand what they cannot themselves see. The invisible barriers become visible so they can be broken down.

← 10 things to know about social inclusion. Reflecting on the last three years. → 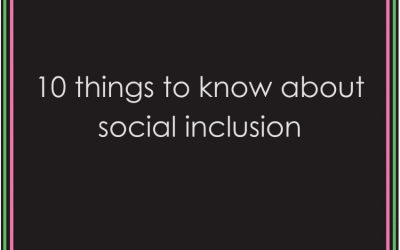 10 things to know about social inclusion.

This week is #SocialInclusionWeek2020 - a week raising awareness of an issue that is of great importance to me. As... 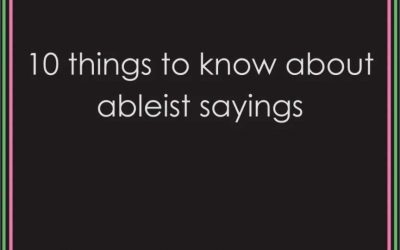 10 things to know about ableist sayings.

Language matters. How we speak matters. It shapes our worlds.  I was recently listening to an interview around... 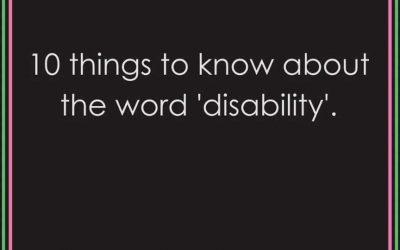 10 things to know about the word ‘disability’.

It's time for another weekly round of '10 things to know about' and this week it's about the word 'disability'. Let's...