Posted by Ainslee Hooper
On May 13, 2020
In Uncategorized

COVID19 — The perspective of an anthropologist with a disability.

For this week’s blog post, please enjoy an article I have contributed to an anthropology anthology about COVID19

2020 started like any other year. A year for new possibilities and new opportunities for personal and professional growth. In Australia, we were in the midst of one of the worst bush fire seasons we had ever witnessed. Half a billion animals killed, extinct or endangered, including our beloved native koala. We were also dealing with something new. Although the worst of the bushfires was in another state, the smoke from the bushfires travelled to other areas. This resulted in conditions that those of us who were lucky enough to live far away from the devastation had experienced before. The levels of smoke in the air were hazardous to our health, so we were warned to restrict our time outside. Little did we know these times would be a test run of what was to come.

As the nation was coming to terms with the devastation that was our fire season, small murmurs about a virus in China started to replace the fires in our headlines. We had just been through the worst, there was nothing else that could be worse. Then the numbers in China started to rise, and not two months later, cases had started to hit our shores. The long-held myth of ‘the lucky country’(Barthes & Lavers 1993) was no longer. We were facing something we could never have imagined. Something that only happened on the news in other parts of the world or the movies. We were facing a pandemic. I remember speaking to my GP about ‘this Coronavirus thing’ and asking him if he thought it was going to be as bad as the Spanish Flu. He bluntly replied, “Yes.”. In the media, our Prime Minister was still telling us that everything will be ok, so to hear these two differing opinions left me feeling unsure. Why would the leader of our country be saying this and yet my GP who I trust, be saying something different?

Although the federal leadership in Australia had already been called in to question, COVID19 has clearly shown the leadership that is required to combat something like COVID19. The leadership response from Australia and neighbouring New Zealand have been drastically different. In Australia, it became clear to state governments that the federal government was taking too long to enforce restrictions, with the rate of infections rapidly increasing, along with the number of casualties. As it stands to date, there have been 95 deaths from COVID19 in Australia compared to that of New Zealand standing at 20. Whilst the Australian PM wavered about restrictions, leaving it up to citizens to implement some “common sense” the New Zealand PM acted hard and fast, putting the population into lockdown from an early stage. Some said it was overkill, however, one only has to look at news sites to see the amount of Australians ignoring warnings from Scott Morrison to see why swift and hard leadership was required.

During COVID19, we have seen both the best of people and the worst of people. At the beginning there was mass panic-buying, hoarding essentials, and fighting over items such as toilet paper. There have also been reports of strange dreams as well as a rise in anxiety levels due to the new world being thrust upon us(Beradt 1968). Thoughts of what if we run out of food? How bad is this going to get? Are we going to starve? What happens if I or my partner get sick? On a personal note for me was the thought of: what if my disability service provider decides to pull out care? The reality was, we were all facing something unknown, and we were all scared in one way or another how it would impact our situation. This is when the beautiful side of humanity started to reveal itself. People like Sherry Turkle(Turkle 2017) argue that the internet is responsible for making people disconnected, yet the response to COVID19 has proved otherwise. There has never been so much connection even in a time where we are disconnected. We are #athometogether in our own homes. The world is actively reimagining boundaries, with citizens coming together as a united community across the world through social media(Anderson 1991). At the same time, some governments are discussing protectionist measures. In Australia, communities are pulling together on Facebook to come up with initiatives to keep children amused during these times. With exercise being one of the valid reasons to be outside, a bear and rainbow hunt was created where we all put a bear and rainbow in our windows for children to hunt for as they walk around the neighbourhood. It was only two weeks in isolation and I nearly cried at the sound of a child laughing. A sound that felt like a distant memory.

Then came the initiative to ensure elderly residents were alright. Elderly neighbours were given red and green cards to put in their front-facing windows. A red card if they need assistance, and a green card if everything is alright. Another community-minded safety measure saw the evolution of the Angel Next Door initiative. Where people are not able to get things they need, they can ask on www.angelnextdoor.com.au and an angel will do this for them so that they remain isolated. With such thoughtful initiatives in place, It became obvious that happiness is what we needed, and the people of Australia have not disappointed. On Facebook, we Australians are fascinated at the response of the Bin Isolation Outing group. People take out their rubbish bins (one of the valid reasons for being outside), post a photo on the Facebook group, and the response is astounding. What was once something so small we did not even think about it, has become a way to make others laugh, and see how creative we can get. At last count, there were over 1 million people. The kindness that is being shared around the world from the grassroots has been phenomenal.

Although we are finding ourselves at home in isolation, it is still business as usual for most, except not so usual. As an anthropologist with a disability, this is where things get interesting to say the least. Only essential services are allowed to work on-site, for the rest that is still able to work, they have had to either pivot their business to survive or alter the way they do things to get the job done. Now, for people with a disability, we are used to altering the way we do things to get things done because of the limitations we have had to live within. We have also been asking for certain liberties to get things done, but have been told that it’s not possible because they would be too difficult to implement. Cue COVID19 and we are now seeing remote working. During in the past where we would have liked the opportunity to remote work, we have been told either it is too tricky to organise, there are too many privacy issues involved, or that it just cannot be done. Even presenting at conferences was a no go if we could not physically be present. The world is thrown in to disarray due to a pandemic and suddenly, remote working and presenting is possible. Even a doctor consult can be done online or the phone now, which from the perspective of a person with a disability is so much more accessible than having to travel by public transport to spend all of 5 minutes with the doctor only to have to travel back home. Although it might sound trivial in the grand scheme of things, even being able to have a wider choice of food delivered to our homes makes the lives of people with disabilities a little bit better, especially in times where our other freedoms have been taken away.

I do not wish to finish on a negative note, however, we must also be realistic about what is going on, especially as people with disabilities. Our innovations are being used in the world so that the rest of the world can survive, and we deserve the right. One of the things I mentioned earlier on is the lacklustre response from the government regarding both people with disabilities and the aged. Although there is a national policy of what needs to happen if the care of both vulnerable groups (of which I am one) is compromised. So, to those looking in from the outside, there appears to be a clear-cut process to follow. Unfortunately, this is not the case at the ground level. Services in place for the vulnerable vary in their responses to COVID19 and emergency plans. Some are on the ball, whilst others are unsure of what to do if COVID19 results in either staff or clients getting sick, leaving those who rely on these services scared about our future. Although the spread of COVID19 seems to be reducing in Australia, the vulnerable are still concerned about our health if we become ill with COVID19, and what this means for our quality of life if COVID19 interferes with our necessary services. The response needs to be one of clarity and cohesion for all services.

There are so many lessons about humanity and the innovations that are enabling us to function in this new normal that we must take into the future. These times are hard, but at the same many have said they would prefer things not to go back to the way they were. As a person with a disability, I agree wholeheartedly with this. I miss not being able to hug my family, so I will be looking forward to that again, but I do not want the future to continue to be a society were people with disabilities feel like we an extension of society, instead of a part of society. We have shown that accessibility can generate positive outcomes for society and at the individual level. Let us use these lessons to make a better future, for everyone, because if COVID19 has shown us nothing else, it has shown us that we are better together than alone. It is no longer a case of every man for himself. Instead, we all have something to share that will help others.

Turkle, S 2017, Alone together: Why we expect more from technology and less from each other, Hachette UK. 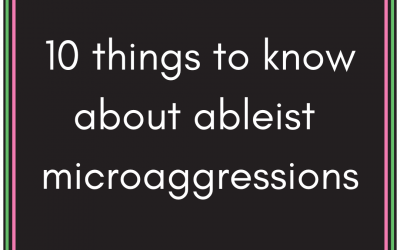 10 things to know about… ableist microaggressions.

This week's "10 things to know about..." is dedicated to microaggressions, but before I launch into my list, I want to... 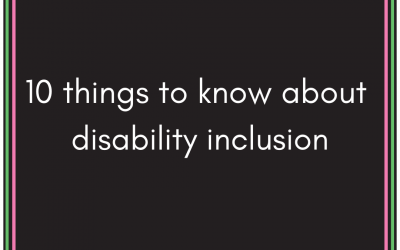 10 things to know about disability inclusion.

I know you've been missing these, as have I! My weekly series of '10 things to know about' and this week I'm focusing... 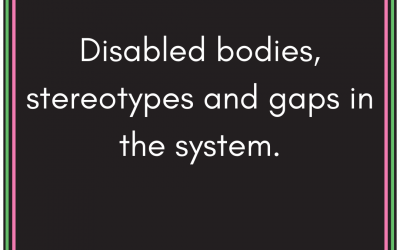 Disabled bodies, stereotypes, and gaps in the system

It has been so long since I have written, that I barely know where to start. So I may as well start with why it's been...

This site uses Akismet to reduce spam. Learn how your comment data is processed.